What is Makrut Lime (Thai Limes)? 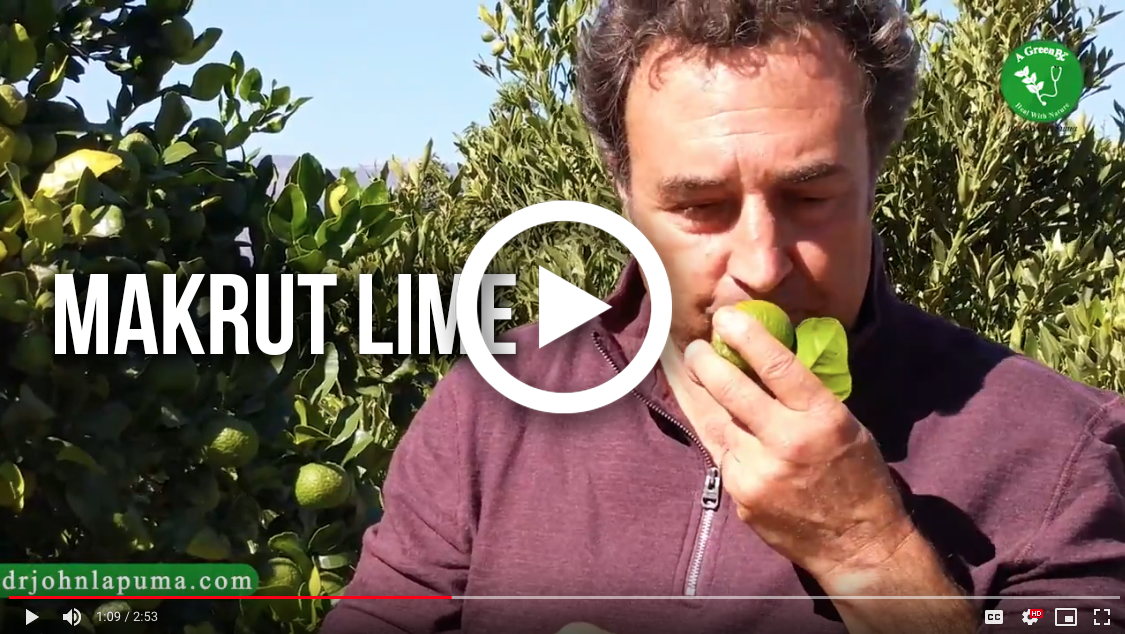 Makrut lime (citrus hystrix), the fragrant, powerful and easy to grow citrus tree, has many medicinal and culinary uses.  Also known as “kaffir lime”, that name is controversial: “Kaffir” means infidel in Arabic, from “kafara”; “kaffir” word is used by white Afrikaners as a pejorative for Black people.

The tree is native to tropical Southeast Asia including southern China, Malaysia, Indonesia, Thailand, and the Philippines; all over the world, both leaves and fruit are used, though the leaf  is more commonly used than the fruit, which looks much like a what’s known as a Persian lime, except that it is bumpy and especially fragrant.

According to UC Riverside’s authoritative pages on citrus:  “Bonavia reported (1886, p. 215) that the fruit of C. hystrix is never eaten; however, it is used by the natives in Ceylon as an insecticide for washing the head and also for smearing on the feet to kill land leeches.   The tree is often cultivated near the villages for these purposes.   According to Bonavia, C. hystrix may have come into Ceylon with the Dutch and their Malay servants for use as a hair wash. ”

In the culinary world, the leaves are most often used to flavor soups and stews. The popular Tom Yam soup in southeast Asian food would not be the same without these leaves, and many other coconut-based soups need the floral, tropical, tart lift that the leaves give them. Leaves add their lemon-near-Bali flavor to foods while the rough skin is used as a whole additive in some curries. Leaves are also used in Vietnamese kitchens; the fruit is sometimes added to drinks.  Zesting the fruit yields lime zest that can be used as a garnish or for an infusion. Scrape the outside to harvest zest and add to prepared foods and drinks—vodkas, gin and other clear liquors.  The juice is rarely used in cooking, because it is very sharp and floral: you only need a drop or two to flavor a dish with that elusive essence.

In personal care, the fruit is used for hair and beauty needs; to improve oily, congested skin; as an antiseptic to help to heal skin infections; and as a hair wash. For the hair, the zest of the fruit is rubbed on the head; in Malaysia, the whole fruit may be boiled and then used as shampoo.

In the medical world, both the fruit and leaves have been studied.  The peel essential oil is used in aromatherapy: in one study, the makrut lime oil extracted from the peel was stimulating, creating a significant increase in blood pressure and a significant decrease in skin temperature. Subjects in the kaffir lime oil group rated themselves more alert, attentive, cheerful and vigorous than subjects in the control group. Extract of the peel reveals potential anti-inflammatory activity through their inhibitory effect on NO, iNOS and COX-2 production in a cell-based assay without exerting cytotoxicity. Their activities were similar to those of curcumin.

In addition, the juice and rinds of the makrut lime are part of a traditional Indonesian medicine called jamu; in Indonesia, the term jeruk obat refers to the lime, translated as medicine citrus.

Citrus fruit oils generally (lemon, lime, orange, bergamot, makrut lime have health-protective benefits. Essential oils should never be consumed and should always be used in a diffuser or diluted with a base oil, such as almond oil.

The leaf essential oil contains similar compounds to the rind, but in different quantities. In a laboratory analysis, the main volatile compounds in fresh leaves were citronella, followed by linalool and viridiflorol. Drying brought about an increase in the concentrations of volatile oils. Extract of the C. hystrix leaf  (but not the peel) oil demonstrated potential antimicrobial activity against growth of P. gingivalis, S. sanguinis, and S. mutans, which were a group of bacteria highly related with periodontal diseases.  Leaves can be used to treat stomach ache caused by dyspepsia and insect bites.

The leaves can be dried, like bay leaves, with some loss of flavor and of course a more brittle texture; they can also be frozen—if they are frozen without any oxygen, they can be better preserved in flavor, but fresh is far superior for flavor. The stems too can be used in soups, sauces and drinks though used primary as an infusing ingredient.

Makrut lime trees are relatively easy to grow, and require, like all citrus, good drainage and lots of sunlight.  The tree has shiny bi-lobed leaves and can sprawl, and it usually grows vigrously. The ideal location is one where the tree gets morning and mid to late afternoon sun, with partial shade when the sun is hottest.

It’s possible to grow a makrut lime in a pot or planter, as long as it can be protected from frost, and the container is larger enough. So, it is well-adapted to container growing and can be an indoor-outdoor plant. The devils is in the details, however.The size of the planter should be proportional to the size of the plant if you are to avoid the problem of over-watering the plant.

Plant into a planter just one size bigger than what you are transplanting.  If your makrut lime tree is in a 1-gallon container, there’s no need to transplant immediately, until it has grown, assuming it is not rootbound– you can check by lifting it out of the 1 gallon pot to see if the roots are thick and circling.  Otherwise, pot it into a 2-gallon container for a year, or until it puts out enough top growth to pot to the next size.

I try to plant in Fall, as there is more root growth then while the ground is still warm, even if little top growth; but for tropical plants, such as makrut lime trees, Spring is an easier time: they don’t have to brave colder temperatures, and can enjoy closer to native conditions during the next 6 months.

If you want to harvest your Makrut lime leaves, it’s best to harvest a whole twig or branch—simply prune it off. Leaves do not regenerate or regrow when you simply pick them off. Growth continues at the tip of the branch, not in the spot where the leaf was picked. Prune back to a node that faces the direction you wish the new growth to go.

There is a reason we charge a minimum of $60/pound for fresh makrut lime leaves, wholesale: they can be tedious to harvest, the tree has small residual thorns, and are $120/kg wholesale. But their scent, flavor, beauty and uses can justify it.

Happily, makrut lime trees do not often fall prey to problems, though they do attract ants, mites, aphids and leafminers. Some ants “farm” aphids—the aphids produce what is called honeydew, which is actually a waste product. The ants eat the honeydew, and because they are being provided a food sources, protect the aphids from enemies. This is a mutualistic relationship.  So, get rid of the ants, and you’ll get rid of the aphids!

Don’t miss my video on the subject!

How To Find Your Happy Place In Nature