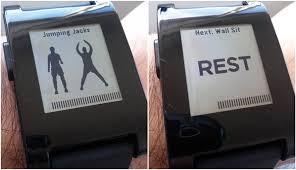 Is it time for smart watches? My patient who like to track like to use simple pedometers, the Fitbit One or one of its ilk (I list the top tracking devices and apps in REFUEL, and compare them). Consumer Reports has a first look at several devices…some of my patients have had a look too.

Some people think that Apple will wait pretty much forever to release their smart watch, so others are getting a jump on it: if your watch can connect to your smart phone or tablet, and you can check it for texts and updates, and run its own apps…why not give it a try?

The leader among the advanced models is the Sony Smartwatch 2, though it is android only, as are all except the Pebble Watch: the Pebble Watch swings both ways: iphone, ipod, Android…and the Pebble Watch checks emails, texts, fitness apps, and has its own app store.  I especially like (as does Consumer Reports) the Pebble Steel, which is good looking and sleek.  It’s also the lightest weight of the bunch.

But the Smartwatch 2 is easy to read, easily pairs with your Android phone or tablet, and has a Dick Tracy feel to the screen.

Consumer Reports calls the Qualcomm Toq “clunky”, and it is nearly the heaviest in this group, at 2.4 ounces vs the Pebble Watch at 1.4 ounces. Though it is easy to navigate, and with lots of preloaded features (including music control and phone calls), it doesn’t appear to have fitness characteristics.

Lastly, Samsung has two cool new watches, the Gear 2 and the Gear 2 Neo (a la The Matrix DVD, I’m sure), plus the Samsung Gear Fit, which is a watch-fitness monitor (again, android only), to be released this week: instant notifications of emails, SMS, incoming calls, & 3rd party apps to keep you connected.

The Samsung watches all monitor heart rate…I think electrocardiograms are not far away. My colleague Eric Topol demo’d one on his iphone to Stephen Colbert, and Quantified Self has never been the same.

Check out the new Smart Watches, even if you’re not an early adopter: they’ll help you learn how your body works, and that is the future of health care.

What I Taught MDs in a Cooking and Organic Farming Demo

5 Nature Activities to Improve Your Physical and Mental Health

What is Gardening for Dementia?