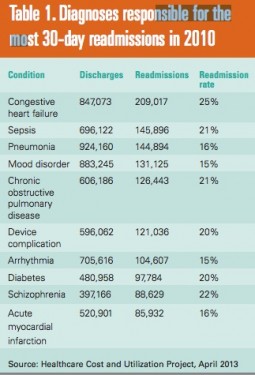 This is not a tale of two financial profiles, but instead, of the same one.  Ever since Medicare proposed reimbursement for specialty procedures (to which the AMA objected at the time, oddly enough), and physicians who had been trained in procedures could get well paid for them, medical and surgical specialists have done more of them.  And generalists, well, not so much.

And when hospitals could discharge and readmit patients and get fully paid each time, as of course would hospitals, there was no financial incentive (although surely social and every other system within hospitals is fully stretched, if inefficient and not focused) to making sure that those patients stayed discharged and did not bounce back.

Even the term bounce back is telling…so telling that it is part of the lexicon, with every physician knowing that disease is inevitable, but even more than that, the environment to which a patient returns will likely shape whether she returns to the hospital promptly, or just eventually.

About 20% of all Medicare patients are re-admitted within 3o days, and “an analysis of 2005 Medicare claims data by the Medicare Payment Advisory Commission (MedPAC) concluded that about three-quarters of readmissions within 30 days were potentially preventable, representing an estimated $12  billion in Medicare spending.” Quite a potential cost savings.

Over the past two years, as Medicare rolled out its program to penalize hospitals and health care systems up to 2 percent of reimbursement this year and 3% next year. The  money can be a lot: a very simple, uncomplicated diagnosis of simple pneumonia is worth about $4k for that DRG and a 3 day hospitalization–much more than an observation payment, but that is another quality issue. “2,211 hospitals will forfeit about $280 million in Medicare funds over the next year, or an average of $126,000 per hospital facing a penalty,” according to Kaiser Permanente. 30 day readmissions of patients with the diagnoses of pneumonia, congestive heart failure and acute myocardial infarction have begun to decline.

As 35% of all hospital 30 day readmissions are estimated to be from congestive heart failure, and as HCFA intends to add both COPD and Total Knee/Total Hip patient diagnoses in 2015, hospitals have begun to learn rapidly what works in reducing 30 day readmission, even if it is not yet borne out by the largest meta-analyses. Out of those come only that home visiting programs and multidisciplinary heart failure clinics prevent readmission…and that is at 12 months out, not the 30 days the market aka HCFA now demand. Never mind that two-thirds of 30-day readmissions were for different conditions than the index diagnosis of pneumonia, CHF and AMI.

“A study by Yale University researchers identified six strategies that were modestly successful in lowering readmission rates for patients with heart failure. These included partnering with community physicians, partnering with local hospitals, having nurses reconcile medications, arranging follow-up appointments prior to discharge, sending discharge papers to patients’ primary care physicians, and assigning staff to follow up on test results after discharge.”

At last, the quality meeting at hospitals will be taken seriously. Indeed, it already is.  Parkland Hospital’s prioritization system earns an AHRQ highlight; the University of Chicago’s rates dropped from 23%  to 18% within 12 months; Project Boost is gathering data which is promising; and you can check your hospital’s progress here.

What’s missing from these varied interventions is how-to about food and fitness. Sure, a dietitian is probably part of discharge planning and case management. But that isn’t enough: there’s no certainty that what works is actually being delivered, and more importantly, whether what works will work at home, whether that’s assisted living, a skilled nursing facility, a sister’s house, or, sometimes, a homeless shelter.

Put aside for the moment that this set of patients is getting special attention so the hospital can avoid or lessen its financial penalty, not for any personal or medical reason or patient safety reason, and that all patients could benefit from specific culinary medical advice and recipes for their conditions. Reducing readmissions is a chance for patient safety in health care, and could utilize out-of-hospital clinicians, caregivers and extended family, not to mention grocery stores, farmers markets and foodbanks.

Our health care system will depend on it.