REFUEL You: How to Make a Book Video Trailer

By DrLaPuma 9 years agoNo Comments
Home  /  Presentations  /  REFUEL You: How to Make a Book Video Trailer 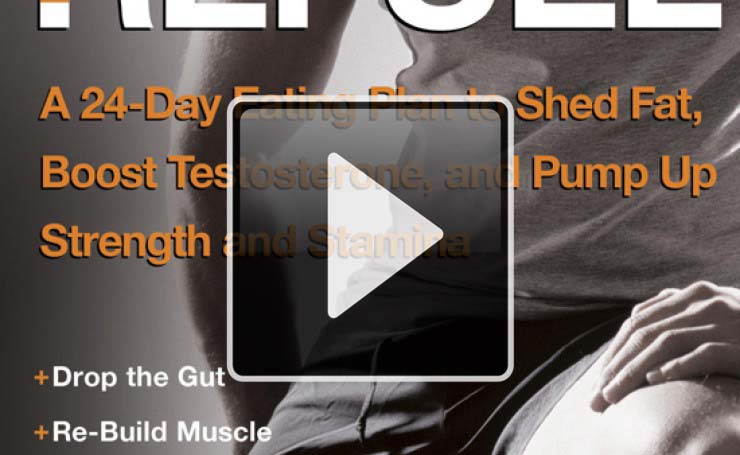 This post explains how the trailer was created, including early concepts, tools, and more.

I first met uber-talented filmmaker Jesse Natale by e-mail: a friend of a friend of a friend sent me to him.or my REFUEL book video trailer, I had interviewed 4 film makers in our cinema-blessed world here in Santa Barbara. I was told to go to LA, what with the movie worlds so close. But I like working one on one with people in the same physical place if I can.

Jesse was the 5th.  I wanted to see if he could see what I see: and the answer was, yes he could.  And then some.

I’d sent him Tim Ferriss’ 59-second trailer for The 4-Hour Body, which I think is better than 4 Hour Chef, but what do I know? The latter has 1.5m views.

The initial response to Ferriss’ first trailer was mixed on HuffPo, but that wash’t his real audience: he eventually made it to The Dr. Oz Show and Upwave, where I’m a new contributor, and Tim has his own show, the Tim Ferriss Experiment!

My first goal: create something truly compelling, shareable and story-rich about the REFUEL concept as I teach and, try to practice it. My second goal: give Tim a run for his money ($12k for his first trailer, 2x or more I would bet for his second): having created the best book trailer ever, Hollywood-style, do it even better.

Above is the first email I sent to Jesse about other examples: I love media, and learned a lot doing the Lifetime TV ChefMD work. I’ve had an ambition to create something great in film for a long time.

First Concepts: What is the Story?

In my office, Jesse told me about the new helicopter cam he’d bought; he talked about workarounds that showed people’s feet instead of faces; he asked me what I saw an emblematic image (my 1952 potting soil mixer, which didn’t make it in, but was a good starting point). 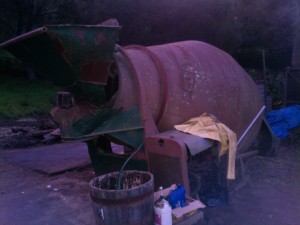 He told me about going fishing at midnight with his Dad, talked about his baby daughter with feeling, was wearing a workout shirt, seemed to intuitively grasp the idea of men getting healthier. He was matter of fact, but I could tell from his online work that he loved imagery and light, and that counts a lot in video.

In that initial meeting, and then in an email right afterwards, I spun out my concept of how a man can Refuel, and afterwards, sent him this script: 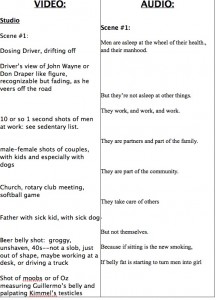 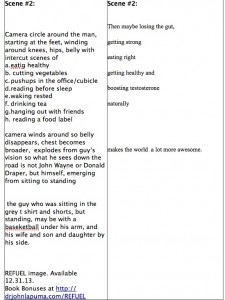 The final  trailer didn’t follow this script exactly: Jesse helped improve it, though the idea of the evolution of man stayed. The pace needed to be engaging: too languid, and you just sit back and admire the images. I want people to lean forward, and feel the possibility, and see and feel the story. Here are my hand written notes about groups of images: #CYCYP means Can You See Your Penis, which is a shot that we felt was a little too R rated for the look and feel of the book.

I loved doing this trailer, but it wasn’t easy. Jesse is a pretty busy guy; he is a perfectionist, too, like me; and his wife was 8-9 months pregnant, depending on the day.

There were a few bumps in our production–like discovering there was no teleprompter at 1130 pm before a 9am shoot– but compared with how complicated national TV productions can be, it was, well, not as intense.

We carried our own equipment, used cable access TV-SB resources, sourced a local actor’s registry, leased royalty-free music and one tiny video clip. Not free, but added to and told the story in an important way.  Jesse and his brother both have composing skills, but we eventually replaced their original music with leased what the Rock and Roll Chase you hear to give it a foundation of the spirit of what I’m trying to communicate to any listener.

The second to last iteration (after 3 half days shooting total–on the farm, in a medical office for the Refuel Minute series, and in the studio for our whirling shot–and not including pickups Jesse got on his own wherever he could) I approved just 30 minutes, as luck would have it, before Jesse and his wife headed to the hospital with her in labor. It was a week before the video deadline, and we used every last minute of that.

When you want to create something great, that people will stop you on the street about, that aims to elevate the message to a top level, then you have to both put in the work and cross your fingers.

One other thing: Jesse loved the idea of a challenge, and was budget conscious from the beginning. He’d never done a book trailer: most filmmakers haven’t.  One told me that trailers weren’t cost effective, and to do something simple. Maybe he was right.  But then, no go for it, no glory. Jesse  liked the idea of the challenge as much as I did, and that’s what made it work.

Don’t, as Ferriss as written, underestimate yourself: “the fishing is best where the fewest go. There is less competition for bigger goals.” So go for it!

REFUEL Nation: Will this man’s story change the way you eat? (2/6)

U.S. Obesity in Men vs Women: Not What You Think