By DrLaPuma 13 years ago
Home  /  Wellness and Mental Health  /  Recipes for Health: Going Gluten-Free for Life 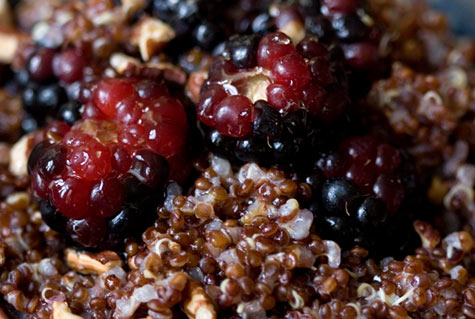 Terri is a 38 year old who traces her tummy problems back to high school. She has had off and on again fatigue, cramping, gas, bloating and mood swings. She has seen 11 doctors, and been told she is a “diagnostic dilemma” and has “atypical bowel syndrome.”

No wonder. Terry has celiac disease, one of the few diseases that can absolutely be caused by—and cured by—what you eat.

The protein called gluten (in wheat, barley, rye and several other grains) is the problem. In over two million Americans – 1 in 133 – gluten results in damage to the lining of the small intestine. That makes it hard for the body to absorb what you eat. Irritable bowel syndrome, Crohn’s disease and depression can mimic and mask celiac disease.

The medicine? Savory, toothsome, gorgeous gluten-free pasta, nuts, vegetables, meats, seasonings and even beer. They can heal and reverse insomnia, depression and even osteoporosis in people with celiac disease.

Terri re-discovered cooking and began to cure herself.

She learned to simmer brown rice and millet in stock, toasting them first for a little nuttiness, and using the pilaf method for full flavors.

She gave up oatmeal, so often processed on wheat-processing equipment, and discovered quinoa.

Quinoa is an ancient, quick-cooking, high-protein whole grain with all 9 essential amino acids. You can use it as a side dish, as a bed for roasted vegetables and meats, or as a better-than-oatmeal hot breakfast cereal (see below).

Terri did find gluten in everything—cosmetics, soy sauce, toothpaste. You’d think she might have just given up. But in fact, she found it empowering to discover what was in what she ate. And that good food, gluten-free, was the only way to heal herself.

So she did. She filled herself with the best ingredients—for her. Food became a joy and pleasure, because she tasted it fully, and didn’t overeat. And it changed her life.

Terri felt better than she had in 40 years! She dropped 15 pounds over four months. She learned that her son’s diabetes indicated his risk, so he had the celiac blood tests, which were normal.

There is four times as much celiac disease in the U.S. as there was 50 years ago. No one knows why. Celiac disease is easy for doctors to miss: no one physician these days can often take the time to hear all of the patient’s symptoms. So nearly all of those who have Celiac Disease have not been diagnosed.

Terri’s case inspired me to create Gluten Free Quiz (www.glutenfreequiz.com) a free, personalized self-assessment of your risk for celiac disease. The completed quiz and your Gluten Free score can be printed from the Web site for personal use and to discuss with your doctor.

Could eating gluten-free really reverse Terri’s insomnia, anemia and fatigue? And taste as good as what she loved to eat, before she found food that her body would love?

Yes it can, including my Warm and Nutty Cinnamon Quinoa Cereal…photo on 101cookbooks.com, and courtesy of Heidi Swanson!

John La Puma, M.D., practicing physician and founder of The Santa Barbara Institute for Medical Nutrition and Healthy Weight, is a professionally trained chef and has pioneered culinary medicine. Dr. La Puma hosts “What’s Cooking with ChefMD?” every week on “Health Corner” airing Sunday mornings on Lifetime TV. He videoblogs on ChefMD and shares a new, fun, easy, healthful and quick recipe every week. You can follow him on Twitter, become a fan on Does it Matter if Your Doc is Overweight?

How to Naturally Treat Seasonal Allergies

How to Keep a Food Journal