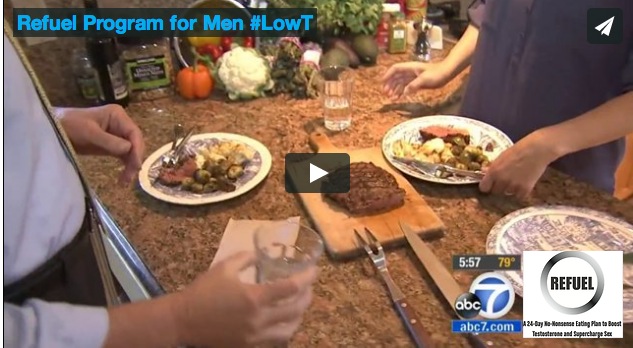 We’re barely half way in and already it’s apparent: if men have had undue attention to what it means to be a man focused on them in any year in this century, it’s this one.

It could be the eruption of the Low T controversy: it might be that Colbert’s skewering was finally enough, or that the world was waiting for MMA to ban the stuff (which it has) powerful enough to keep Barry Bonds out of the Hall of Fame, or that the FDA finally issued a warning about blood clots from the drug, or that Health Canada‘s official, smart warning about heart attacks were just enough to add up to news.

Or it could be the dollars–the growth in T prescriptions is stratospheric, and the mills opened to prescribe it often do not require seeing a physician.

The FDA now has planned an upcoming September re-meeting about whether to pull/restrain prescriptions for the stuff, now shown to cause heart attacks and strokes in older men, while not correcting the underlying metabolic problem in nearly all men, which of course is related to weight, eating, toxins and fitness, and possibly chronic stress. September cannot come soon enough.

It could be that men acting badly (in some cases, horribly and immorally) have had a bountiful year already: with 3 terrifying college murder sprees, or even more cases of celebrity hard-assedness aka arrogance, or the nearly uniformly male stonewalling of nearly all male Veterans waiting for primary care appointments, with nearly uniformly male doctors, about half of whom according to the best studies, have one or more symptoms of burnout.  The lack of a coherent way to model and showcase masculinity seems obvious.

Or it could be that the media love a story, and they’re running with it–NPR with their #MenPR summer radio series, with profiles of men who rarely are recognizable but reflect the diversity of what men think, though they often seem confused about what it means to be a man, except for the vegan men, who are sure that their eating pattern is, indeed, manly.

Time magazine  features an August cover story on the old, tired term of ManoPause, which some reporters appear to believe is new, but appeared in the medical literature in the year 2000, and in the popular press well-before that.

Irrespective, the concept is an error: the rearrangement of male hormones over time is not fated, according to recent Aussie data, but readily malleable with fitness and eating, unlike the gradual decline in estrogen in women in midlife. The Time reporting is good, however, as is the basic Today Show interview that followed…it would have been nice to see the relationship between the drop in male drive and the economy, recession, male job hunting and job loss…but I’m afraid that is old news, even if still true.

But here’s what missing: men’s health–energy level, cholesterol, blood pressure, demoralization, fitness- can be restored without drugs, without bad behavior, and without media exaggeration. It takes a lifestyle change, the right eating pattern and simple, effective techniques specific to men’s metabolism–especially men who are insulin resistant…which is nearly all men with a belly 40 inches or greater, measured properly.  Watch the clip, and see if you want to Refuel.  Men can do so much better than Man-Some.

How Cooking Can Change Your Life