A Reporter Eats His Way to Lower Cholesterol: Do You Need Lipitor, or Can You Do It With Food?

By DrLaPuma 17 years ago40 Comments
Home  /  Aging and Costs of Aging  /  A Reporter Eats His Way to Lower Cholesterol: Do You Need Lipitor, or Can You Do It With Food? 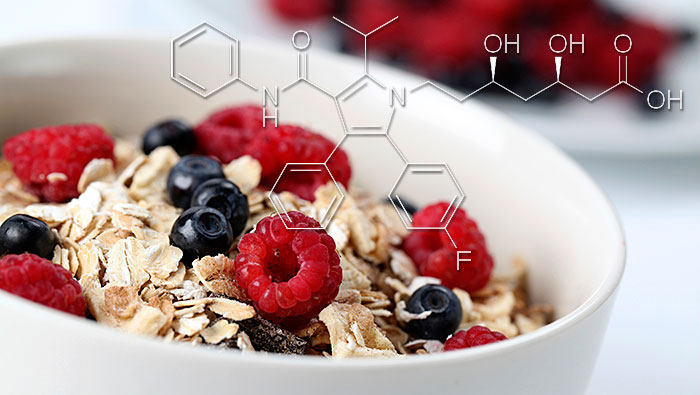 The New England Journal of Medicine reports that Lipitor beat Pravachol in cholesterol-lowering decades ago, but now rosuvastatin seems to be the most potent statin. Using food to lower cholesterol is an additional, not alternative approach.

How long does it take to lower cholesterol with medication? It depends. Here is a list of statins, below: in general, they take effect within two weeks, and sometimes sooner. Common practice is to wait four weeks until the next blood test.

Equally important is when to take them: at night is best, because that’s when cholesterol is made in the liver, because there is no eating going on, and the body is “fasting.” Taking lipid-lowering statins in the evening can lower your cholesterol itself.

There are a number of excellent alternative to statins and other cholesterol-lowering drugs. The Chicago Tribune most recently cites my work about this, as has the New York Times and the Wall Street Journal, below. Most of the alternatives are foods!

I’ve written about how to lower cholesterol with food quite a bit, and the research has followed, especially from Dr. Jenkins in Toronto, who created a portfolio diet of cholesterol lowering foods.

Several important additional foods that lower cholesterol that have emerged since I worked with Pulitzer-prize winning report Tom Burton on his cholesterol: green tea catechins.  You need 1315 mg catechins/day (which is less than 4 mg caffeine) to lower LDL cholesterol: that means 2 capsules of this immune active supplement daily.  Green tea is highly variable in this, but if you like, you can try 4 cups a day at 4 ounces per cup.

And of course, the supplementation with hazelnuts (filberts) and extra virgin olive oil in the Predimed trial  in which the participants were already eating a Mediterranean diet, lowered their risk of heart disease, which is the primary goal of lowering LDL cholesterol. Hazelnuts are not the only tree nut that work to lower cholesterol, but fresh hazelnuts are delicious, can be bought in the shell, or shelled, like Brazil nuts, which also work.

A Reporter Eats His Way To Lower Cholesterol

But most doctors don’t really know the dietary specifics to lower cholesterol sharply, which is why the government recommends a pill called a statin for as many as 36 million people with excessively high cholesterol. Even when doctors have the knowledge about how to reduce cholesterol without medication, they generally lack the time for real dietary consultation.

That void has helped PfizerInc.’s Lipitor, the most famous statin, become the world’s top-selling drug with another statin, Merck & Co.’s Zocor, not far behind. Such drugs, which inhibit production of an enzyme instrumental in creating cholesterol, have shown excellent effects in reducing LDL, or “bad” cholesterol, and heart attack risk, and they are relatively benign. All drugs have side effects, though, and another statin, Bayer AG’s Baycol, was pulled from the market in August 2001 after causing fatal muscular illness.

Many doctors are highly skeptical that people can significantly lower their cholesterol through dietary changes and heightened exercise. But an increasing number of them are coming around to the view that such lifestyle changes may well have powerful effects, and a recent study of a high-fiber, soy-intensive diet did show impressive results in lowering LDL.

See some recipes that help to lower cholesterol, and taste good.

I have learned through powerful personal experience that people really can significantly lower their bad cholesterol (LDL) with dietary changes rather than pills. While lots of doctors will say this is nearly impossible for most people, I accomplished it through sharply increased exercise, and some fine-tuning of delectable food choices. Simply put, I used food as medicine.

My case was a quandary: I already exercised diligently, running about four miles most days. I had long ago given up red meat and most cheese. Yet my bad cholesterol last October was 169, way above my recommended high of 130 and an optimal 100. (People’s LDL goals depend on their number of risk factors such as smoking, diabetes or high blood pressure.)

While my “good” cholesterol, or HDL, was a very protective 72, the total cholesterol of 262 was way above the recommended high of 200. Some doctors were already foretelling statins in my future — a prospect I wished to avoid.

But I had little clue about how to proceed. Federal guidelines urge a diet rich in fish, whole grains, fruits and vegetables, and lean meat. But, like many people with elevated cholesterol and its related higher heart-attack risk, I had already done much of this. And my cholesterol was still out of sight.

Actually, he enlisted me, challenging me after some e-mail correspondence on another story to try his dietary changes and write about the effort. His recommendations are based on sound principles; a recent study of a similar diet showed significant lowering of cholesterol.

The first step was filling out daily logs of everything I ate, when, where and even why — for example, whether I felt hungry before eating. This exercise helps determine whether clients eat because they’re hungry or to fill a psychological need. The logs are also designed to find out how much saturated fat or trans-fat people consume, in foods such as hamburgers or many baked goods.

That wasn’t my dilemma. With red meat gone, my limited indulgences took the form of occasional cheese, or roast chicken with skin on. Many Saturday nights, my teenage children and I would enjoy our favorite customary meal: Slow-Roasted Hen, a Paul Prudhomme Cajun roast chicken, heavily spiced, accompanied by pan-roasted rosemary potatoes. Dr. LaPuma never told me to cut it out. But his message was this: More proteins each week should come from fish, beans and nuts, and less from chicken, especially with skin.

Phasing Out the Chicken

Over several weeks, I did largely phase out the roast chicken on my own. I also cut out shrimp and squid, which are high in dietary cholesterol. The secret was adding multiple terrific dishes to the weekly cycle. There was a Turkish eggplant recipe, and white beans with escarole and tomato. Foods with high soluble fiber content are especially useful in drawing cholesterol from the blood. Oatmeal (the steelcut kind at health-food stores), unrefined (not pearled) barley, recently ground flaxseed, roasted soybeans, cannellini and other beans, eggplant, whole-wheat pasta and Brussels sprouts all helped. So did the cholesterol-lowering butter substitute Benecol (another option is Take Control).

For many people, following such a regime may be more unpalatable than taking drugs. For one, a diet so high in fiber can cause digestive problems, though these are easily remedied. In addition, some of the ingredients are literally hard to swallow. I never got used to the two tablespoons of ground flaxseed that I downed each day. I usually just gagged it down the way children used to drink cod liver oil.

In January, though, my test results were disappointing. My LDL number was down only 10 points, to 159. Total cholesterol also fell 10 points, to 252. But Dr. LaPuma, noting that few major changes work within three months, was encouraging.

We intensified the campaign. Instead of three to four miles roughly five days a week, I pushed that to four to seven miles. Weight loss helps lower LDL cholesterol, and I have dropped 10 pounds over the past few months, leaving 160 pounds on my 5-foot-10 frame. Not everyone will want to run similar distances, but stepped-up exercise and lower weight can lower cholesterol.

This month, I bit the bullet and got a third blood test. Nervous about abjectly failing and having to write about it, I was relieved when my rather astonished internist in Chicago, Paul Szyperski, called and said, “What have you been doing?” My LDL was down 33% to an acceptable 114, well below our original goal of 130. Total cholesterol was 200, exactly the dividing line between acceptable and “borderline high.” (Levels of two newer blood markers linked to coronary disease, C-reactive protein and homocysteine, were also low; the C-reactive protein fell from the earlier test.) Since my protective cholesterol, HDL, was up to 75, the total number looks relatively better.

A second blood test a week later was less dramatic, but still very positive: LDL of 142 and total cholesterol of 217. Even with these latter numbers, says Dr. Szyperski, “With diet alone, I would be happy with an over 25-point decrease. It takes you potentially out of needing medicine.”

One person’s story doesn’t necessarily apply to everyone. Steven E. Nissen, medical director of Cleveland Clinic’s cardiovascular center, believes that for most people eating habits are too ingrained for a significantly changed diet to be a sustainable approach.

Check With Your Doctor

But these dietary changes may well remove the need for many people to take medicine, and lower their dependence on them for many others. Still, people should not stop using statins without consulting a doctor. To find a diet coach to help work on your cholesterol, check with a cardiologist or a dietician at an academic hospital. In general, cutting back on saturated fat, and increasing fiber and soy products will help improve a person’s cholesterol.

Apart from not spending my, and my employer’s, money on drugs, there has been another side benefit of all this: My kids actually like a lot of these dishes.

My 16-year-old daughter regularly makes steelcut oatmeal for breakfast and enjoys split pea/carrot soup with tarragon, nutmeg and barley. And my 14-year-old son’s special request for dinner this past Saturday wasn’t Slow-Roasted Hen any longer, but grilled salmon with honey-mustard marinade.

You can’t get that with a pill.

Choose Another Fish, Other Than Tuna Fish, for Your Healthy Kid

Your Medicine Cabinet and Weight Gain