U.S. Obesity in Men vs Women: Not What You Think

By DrLaPuma 6 years agoNo Comments
Home  /  Books  /  U.S. Obesity in Men vs Women: Not What You Think 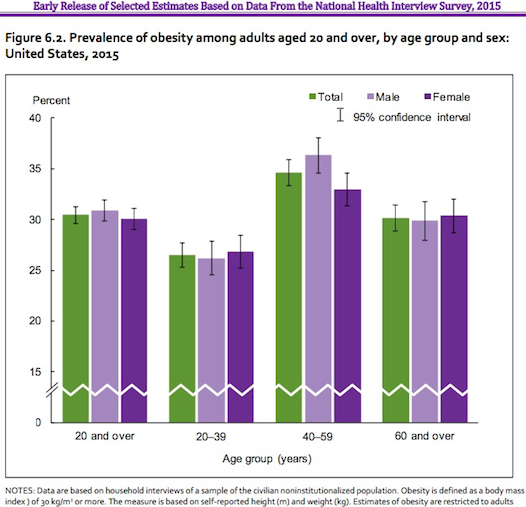 It’s this new graph, from the new CDC Early Release of U.S. Obesity Estimates, 2015 men ought to know about: in which men for the age group 40–59, the prevalence of obesity was higher among men than among women (36.3% v 33). There are more gruesome details too.*
For most men, that’s the prime of life: where you’re building not just income and equity, but a family, a career, a sport you can love and something to look forward to when you get off the rat wheel.
Being obese slows you down, zaps your energy, steals your thunder. Most men think they burn off the extra weight: wrong. Only prize fighters and Golden State Warriors can do that.
Most men fail to appreciate that the extra tire around their waist is inside, and those fat cells–which make men obese–turn the testosterone their testes make into estrogen.
Rising obesity in men is a public health crisis for other health reasons: men get diabetes at an average BMI of 31 vs 33 for women.  Men have triple the heart attacks as do women, before the age of 64, and double before the age of 74.  Half of men get cancer, versus just a third of women, and many of those cancers are related to obesity: colon cancer, rectal cancer, stomach cancer. Men die 5 years earlier than women–again, obesity. 92% of workplace deaths happen to men.
I am so proud that my REFUEL book has made a difference for thousands of men: I’d like the chance to help even more: grab your free REFUEL bonuses from this page, and get ready to get fit…or just as powerfully, help a man you love get his mojo back.
Because this is a fixable problem–one man at a time, one family at a time, one block at a time, one group at a time. I know: I’ve helped hundreds of men. Yes, as a culture, we need to shift towards health as wealth. But we have to start somewhere ourselves, and that somewhere is in the kitchen, dinner table, wherever we eat.
*For 2015, 30.4% (95% confidence interval = 29.62%–31.27%) of U.S. adults aged 20 and over were
obese.  This was higher than the 2014 estimate of 29.9%. The prevalence of obesity among U.S. adults aged 20 and over increased from 19.4% in 1997 to 30.4% in 2015.
Non-Hispanic black women (45.0%) were most likely to be obese, followed by Hispanic women (32.6%) and non-Hispanic white women (27.2%).  Non-Hispanic black men (35.1%) were more likely to be obese compared with non-Hispanic white men (30.2%).
Tweet
Share
Share
Pin

Spring Cleaning, Inside and Out

Can You Rev-up Your Metabolism?