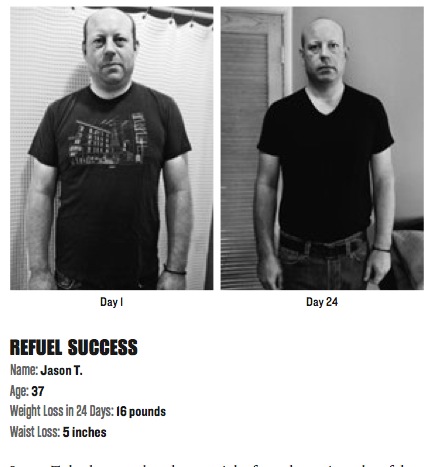 Here is #6 of 6 how-to stories to describe how successful men do it (often with women to help): how those who REFUEL  get their mojo back.  Jason had the sort of mirror wake up call many men do, but had some medical concerns as well.

That’s often what prompts men to look around for a way to get healthier, and it’s a good thing. I think men can and should know more about how their bodies work and see food.

This is excerpted from my new book Refuel:  A 24 Day Eating Plan to Shed Fat, Boost Testosterone and Pump Up Strength and Stamina). I’m so grateful for the great response: and the cool part is, we’re just getting started.  I’ve just returned from the Dads 2.0 conference in New Orleans: great people, great companies, great spirit, great movement. Men should be as healthy as women; can leverage metabolic advantages to do so; and can use the help of women and families.

Jason T. had wanted to lose weight for a long time, but felt stuck in a rut. Then, something happened that made him realize he had to change. “I was taking a picture in a Polo shirt for my company website, and when I looked at the pictures I had extra skin around my neck and lots of belly fat,” he recalls. “Worse, my chest was pointy, like I had boobs. I had to tape down the points so I could take the picture. At that point I knew I needed to lose weight.”

His weight gain was gradual and crept up while he wasn’t looking. “I think I unconsciously avoided seeing my appearance. I never really looked in mirrors; just when I was washing my hands or getting ready quickly, but I never really got the whole picture.”

Jason found himself spending more time at happy hours, socializing and drinking a lot, which led to eating a lot, too. “It became more of a crutch, I think; there’s a sort of gratification in eating and drinking whatever you want.”

He had tried a lot of different ways to drop weight: cleanses, all vegetables, raw foods, no carbs, lots of exercise. “I’ve always put on easily and never been a big exerciser.” He was looking for something he could stick with long term when REFUEL came along.

“I had a lot going on when I first started the plan,” he says. “I was busy with work: I had seminars to attend and company in town for business.”

Still, when he stepped on the scale on day 6, he realized he had lost 4 pounds. “It really came by surprise—I didn’t prepare well and still it was very easy.”

The fast results were motivating, kicking him into full gear with the program. “I made sure I was drinking as much #citruswater as I could, refilling with filtered water and carrying a stainless steel bottle. I tried to stay away from plastics, especially when it involved heating or hot things. I ate pistachios in the shell for snacks and a variety of fish, and skipped sauces on meats.”

He didn’t stop going out or eating at restaurants, but he made changes to how he ordered. “I just tried to make the smartest choice—chicken with lemon and capers and extra vegetables, no potatoes or starches.”

Since Jason has diverticulitis, he still needed to make sure he was getting enough fiber despite keeping an eye on carbs. “I ate tons of vegetables and salads and water was huge—I never used to drink enough water.”

“It got me out of my rut,” says Jason of REFUEL. “I realized it’s somewhat depressing—to not be where you want to be mentally and physically.”

The changes were noticeable even by others in just 10 days. “I was working a lot and didn’t see my friends during that time. When they saw me, I heard ‘Wow!’ They were shocked at much weight I had lost already.”

Everything seems to be changing, in a good way. “My face and body look thinner and healthier, my pants are practically falling off—it’s definitely motivating. And it’s nice that people are noticing.”

A big benefit for Jason was improved sleep. “I rarely used to wake up feeling well rested,” he says. “I have sleep apnea and bouts of acid reflux, but I’ve noticed I’m sleeping much better and I’m not experiencing the scary moment where I wake up choking from reflux.”

Do you see parts of Jason’s story that is your story, or the story of a man you know? Let me know here.