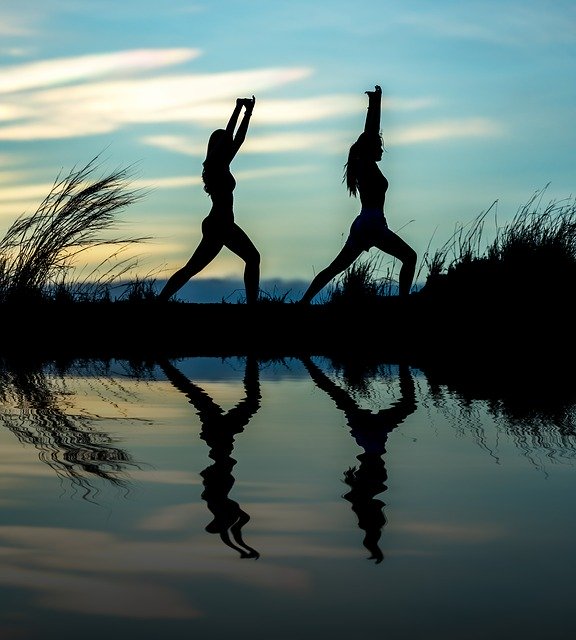 What if I told you that a daily downward dog in the park could help you reduce your stress, heal your depression and PTSD, and even lower your blood pressure, manage your symptoms of chronic diseases like COPD and Parkinson’s, and help you sleep better? The health benefits of yoga in nature are plentiful and we’re going to discuss them–as well as what yoga in nature is today.

Welcome to another installment in my “What is Ecomedicine?” series, part of my goal to create a compendium of well-researched scientific blogs on various kinds of ecomedicine or nature therapy. Since there are so many kinds of ecomedicine or nature therapy out there, I want to help you find what you need to begin to feel better—with actual scientific facts about what works and what doesn’t.

Today, we’ll be asking and answering the questions: what is yoga in nature? Who and what is it for? And what does science say about it? Read on to learn more.

What is yoga in nature?

For the uninitiated, yoga is a mind and body practice that originated in ancient India. In Sanskrit, the term “yoga” means “union”—union between mind, body, and spirit. In the case of yoga in nature, yoga is also about union with the natural world: all the plants, animals, and natural elements that nourish us and every other living and nonliving thing. Yoga in nature allows its practitioners to truly “walk the walk” when it comes to finding union with the natural world!

While there are a number of studies on the health benefits of yoga and even more on the health benefits of nature, there aren’t as many which have studied these two things in tandem. One pilot study from 2013 looked to examine the effect of spiritual care of cancer patients using integrated medicine in a green environment, including yoga as well as forest therapy, horticultural therapy, and support group therapy.

I hope to see more and more studies like this that look closely at the connections between green environments, therapeutic interventions, and patient well-being. However, there’s still a lot we can learn by studying both yoga & nature and the ways they impact the health of our bodies.

Before we get to yoga in nature, it’s important that we first tackle the question of what, exactly, the science has to say about the health benefits of yoga itself.

Yoga has been used as a therapeutic modality for centuries, but it’s only fairly recently that the science has caught up with its prodigious usage. One 2015 comprehensive analysis of 486 high quality publications of yoga therapy research in clinical populations found that the number of publications rigorously studying yoga had exploded in the decade prior to their study. Now that we have 15+ years of studies under our belts, it’s easier than ever to get a clear picture of the science behind how yoga helps us heal.

Whether you have just a passing familiarity with yoga or you’re meeting with your mat daily, you probably have an inkling that yoga is supposed to be good for you. But you might be surprised by just how good it can be—and how many wildly diverse health problems it can be a palliative for. Yoga can be a valid therapeutic technique for dealings with problems like depression, anxiety, high blood pressure, heart disease, stroke, PTSD, Parkinson’s, and even cancer.

Yoga has been scientifically proven to help folks suffering from mental health issues such as stress, depression, anxiety, and PTSD.

A prospective, randomized, controlled pilot trial from 2017 took a look at the effect of a yoga practice on major depression of mild-to-moderate severity. Twenty participants were randomized to 90-minute hatha yoga practice groups twice weekly for 8 weeks; the results showed that the yoga group exhibited a “significantly greater 8-week decline” in their Beck Depression Inventory-II scores in comparison to the control group, and the yoga group was also more likely to achieve remission as defined by the BDI score. The researchers ultimately concluded that the yoga program had resulted in “statistically and clinically significant reductions in depression severity.”

Yoga can also help with stress reduction. A randomized controlled study from 2019 looked at the effect of yoga on stress level in infertile women and found statistically significant differences between the mean scores of the control and experimental groups, findings which supported the hypothesis that yoga could reduce stress levels.

Yoga can also be hugely helpful for folks dealing with PTSD, especially veterans. A study from 2018 looked at the impact of yoga on post-9/11 veterans diagnosed with PTSD, as determined by a score of 30 or higher on the PTSD Checklist-Military version (PCL-M). It found that participants showed decreases in all three of the symptoms charted by the PCL-M (hyperarousal, re-experiencing, and avoidance), as well a significant reduction—by “both statistical and clinical measures”—in total PCL-M scores. Participants also showed improved mindfulness scores as well as decreased insomnia, depression, and anxiety symptoms.

But it’s not all, as they say, in your head! Yoga can have an effect on a number of other medical conditions, including blood pressure, cancer, Parkinson’s disease, and chronic diseases like heart disease, stroke, and chronic obstructive pulmonary disease (COPD).

A study from 2015 aimed to look specifically at the effect of yoga on individuals with chronic diseases, starting with a systematic review of randomized controlled trials examining yoga programs for individuals with heart disease, stroke, and COPD and then doing a meta-analysis of their findings. They looked at exercise capacity, health related quality of life (HRQL), and psychological well-being, and saw increases in both exercise capacity and HRQL, as well as reduced symptoms of anxiety after yoga in individuals with stroke.

One randomized clinical trial from 2019 looked at whether yoga was superior to conventional physical exercises for stress and symptom management for folks with Parkinson’s disease. They found that the yoga group had “significantly better improvement in outcomes” compared to the stretching control group, especially in the areas of anxiety, depression, perceived hardship, perceived equanimity, and disease-specific HRQL. What’s more, the yoga program was just as effective at improving motor dysfunction and mobility as the stretching and resistance training exercise (SRTE) that the control group participated in—while also having the added benefit of reducing anxiety and depression symptoms and increasing spiritual well-being and HRQL!

Those famously destressing qualities of yoga can have a positive effect on our blood pressure. A systematic review and meta-analysis from 2017 looked at the effects of meditation and yoga on decreasing blood pressure (BP) in patients with hypertension and found both meditation and yoga appeared to decrease both systolic and diastolic BP, a reduction which was statistically significant.

Yoga can even help improve cancer symptoms, according to an exploratory, qualitative analysis of the patient experience from 2015. The patients they spoke to all reported “positive experiences and no adverse effects following yoga practice for management of cancer and its symptoms,” suggesting that yoga is a safe therapeutic practice with potential benefits for folks dealing with cancer symptoms.

And in 2017, a review of non-randomized studies and randomized controlled trials of yoga interventions for children and adults undergoing treatment for any cancer type found that the results “consistently support improvement in psychological outcomes,” as well as enhanced quality of life and better sleep. Ultimately they concluded that the evidence “supports recommending yoga for improving psychological outcomes, with potential for also improving physical symptoms.”

Now that you see just how effective yoga is all on its own, we can look at what makes yoga in nature so special.

These days more and more people are seeing the benefits of bringing yoga and nature more closely together. The pandemic might have forced their hands initially, but people are moving their indoor yoga practices to parks, rooftops, and beaches—and then seeing the positive impacts of their practice amplified. Doing yoga in nature essentially supercharges all the regular benefits you’d see from yoga indoors: reduced stress, depression, anxiety, blood pressure, and symptoms and increased mobility, motor function, psychological well-being, and quality of life.

It all comes back to the tremendous health benefits that being immersed in nature brings us. Take, for instance, this seminal 2010 study on the benefits of forest bathing, which shows how immersion in the natural environment of the forest leads to “lower concentrations of cortisol, lower pulse rate, lower blood pressure, greater parasympathetic nerve activity, and lower sympathetic nerve activity.”

And sometimes all it takes is just the right view. A 2015 study of the human physiological benefits of viewing nature found that the fractal patterns we see in nature—found in places like shifting tree branches, crashing waves, and breezy fields of grass—have powerful psychological and physiological benefits on us. This suggests that the “visual randomness” that no algorithm can replicate is part of what makes being in nature so impactful!

Just like a peanut butter and jelly sandwich, yoga in nature takes two wonderful ingredients (yoga and nature, of course!) and combines them for an out-of-this-world therapeutic experience. When the stress-reducing powers of yoga are integrated with the stress-reducing powers of nature, we can maximize the benefits of both kinds of therapy for an invigorating and healing experience. So why not take your mat outside and find a beautiful natural place to practice? Namaste indeed!

(Remember: Ecomedicine is a far more diverse and interesting field than people might realize—it’s much more than just “going outside!”—and so the purpose of these blogs is to show you the exciting range, diversity, and nuance of the many therapeutic interventions that fall under the umbrella of ecomedicine or nature therapy. You can check out the other blogs I’ve written on the site, on topics like gardening for dementia, therapeutic horticulture, pet therapy, adventure therapy, blue care, ecotherapy, care farms, forest bathing, hydrotherapy, breathwork in nature, earthing and grounding, greening the indoors, light therapy, culinary medicinal herbs, culinary medicinal spices, sound therapy/soundscapes, surf therapy, and care farm best practices.)

What Are Blue Spaces?

Benefits of Sunlight: Why You Should Spend More Time Outside