What is Surf Therapy? 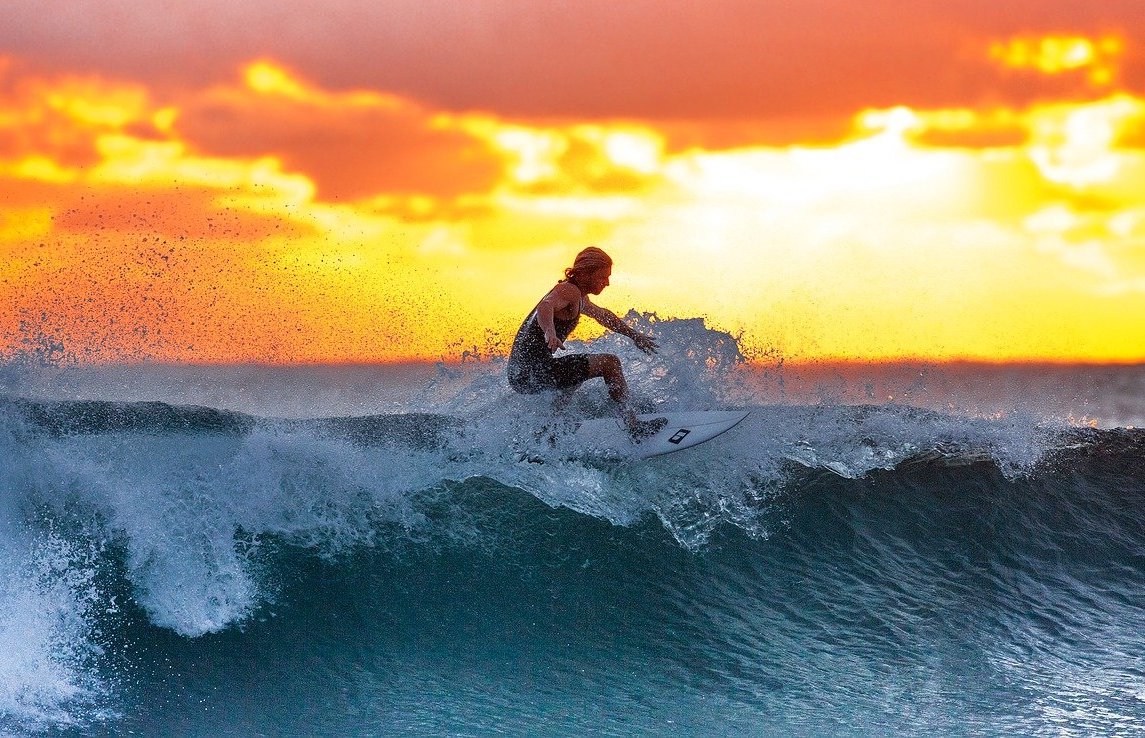 What if I told you that catching a tasty wave isn’t just a great way to hang loose—it’s also a bonafide therapeutic technique that can help reduce symptoms of depression, stress, PTSD, and more?

Welcome to another installment in my “What is Ecomedicine?” series, part of my goal to create a compendium of well-researched scientific blogs on the various kinds of ecomedicine or nature therapy out there. Since there are so many kinds of ecomedicine out there, I want to help you find what you need to begin to feel better—with actual scientific facts about what works and what doesn’t.

Today, we’ll be asking and answering the questions: what is surf therapy? Who and what is it for? And what does science say about it? Read on to learn more.

What is surf therapy?

So what is surf therapy? It’s defined by the International Surf Therapy Organization (ISTO) as “a method of intervention that combines surf instruction/surfing and structured individual and/or group activities to promote psychological, physical and psychosocial wellbeing.”

Surf therapy uses the physical activity of surfing as an anchor to the healing process and is often accompanied by “individual mentoring, social skills development, psychoeducation and/or group discussions to promote healing, strengths, resilience and personal growth.” And like many other kinds of nature therapy, it can be utilized both as a stand-alone intervention and as an addition to other more traditional approaches like psychotherapy or medication.

What does science say?

Anyone who’s ever caught a wave—or even just a surf movie—can tell you that surfers seem to be pretty relaxed folks. But is there any scientific validity to the idea that surfing can actually be a therapeutic tool for healing mind, body and spirit?

Like many forms of nature therapy, the research is still catching up with us; though surf therapy has been a technique used by programs and nonprofits since the 90s, the oldest research on the topic emerged in just 2010, so there’s only been a decade of scientific data. What we do have so far, however, indicates that surf therapy is indeed incredibly beneficial for a number of different populations with diverse mental and physical health needs.

Take this fantastic 2020 scoping review of the qualitative and quantitative research that currently exists on surf therapy, which found a wealth of evidence to support the idea that surf therapy is “a means of improving both physical and psychosocial health outcomes” for the people who use it. The review also identified the types of patients for whom surf therapy is especially beneficial.

Surf therapy helps all sorts of people, from kids with disabilities and troubled teens to adults with addictions, military service members and veterans. And benefits range from improved emotional regulation, social competency and self-confidence to reduced anxiety, stress, PTSD, addiction, and pain. 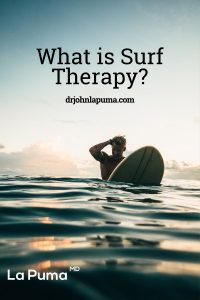 Who does surf therapy help?

One population whom surf therapy has shown to benefit is that of children with disabilities. A clinical trial from 2020 aimed to explore the effects of an eight-week surfing intervention on various physical fitness measures in 71 children, who had disabilities such as autism spectrum disorder, down syndrome, global developmental delays, and cerebral palsy.

Compared to a group which instead engaged in “unstructured pool playgroups,” the surfing group saw significant physiological improvements such as improved core strength, upper body strength, flexibility, and cardiorespiratory endurance, as well as a significant reduction in total body fat percentage and a significant improvement in bone mineral density.”

Active military veterans are another population that has seen tremendous benefits from surf therapy programs. A single-group, longitudinal study from 2019 examined psychological outcomes among 74 active duty service members participating in the Naval Medical Center San Diego surf therapy program. They saw a significant decrease pre- to post-program of symptoms of depression, anxiety, PTSD, and other negative affect, as well as a significant increase in positive affect.

And a fascinating 2011 case study looked at surfing as a means of therapy for combat-related polytrauma—polytrauma meaning concurrent injury to the brain and several other body areas or organ systems, resulting in physical, cognitive, and psychosocial impairments. The case study looked at a 21-year-old active duty US Army soldier whose injuries included a bilateral transfemoral amputation, severe burn injuries, traumatic brain injury (TBI), mild depression, and severe pain. After having been enrolled in the Naval Medical Center San Diego surf therapy program for six months, results showed that the patient had made incredible strides in his recovery, outpacing his peers who had not participated in the clinic: said one researcher, “he was one of few patients at our facility with transfemoral amputations who was able to walk on bilateral prosthetic limbs full time; he significantly reduced his narcotics for pain control; his depression resolved; and he reported temporal relief from TBI.”

The success from these smaller studies has led to the very first randomized control trial on surf therapy, which will study both surf and hike therapy as potential interventions for active duty service members with major depressive disorder—with the hypothesis that surf therapy might have greater benefits than hike therapy due to the immersion in blue space. That RCT is still ongoing as we speak; I’m excited that more rigorous study is being done in this obviously promising area, and I’ll be eager to see the results!

As you might have guessed, surf therapy is also an excellent tool for veterans to help them manage their PTSD, depression, and stress once their active military duty is through.

A small, uncontrolled study from 2014 looking at the effect of high-intensity sports on PTSD and depression found that the participants, who engaged in a surf therapy program called OceanTherapy, reported clinically meaningful improvement in both PTSD symptom severity and in depressive symptoms.

And a narrative analysis from 2014 found that surfing allowed veterans to get a sense of respite from their PTSD, suggesting that “nature-based physical activity, encapsulated in the conceptual notion of the ‘blue gym,’ can promote well-being among combat veterans.”

Several studies have pointed towards surf therapy as an effective tool for reaching youths who need extra emotional or social support.

A study from 2015 looked at the positive impact of structured surfing courses on the wellbeing of vulnerable young people. The study looked at a six week surfing intervention called the Wave Project aiming to boost wellbeing and confidence among 84 young people, aged eight to 18, who faced mental health issues or social exclusion. They found a “significant and sustained increase in wellbeing,” including an increase in positive attitude, better communication, and improved self-management and behavior at both home and school, according to parents and referrers. Participants self-reported feeling better (96%), happier (98%), had fun (99%), made friends (89%) and felt fitter (87%).

Another study from 2014, also looking specifically at the Wave Project, explored the effects of surfing on a group of 20 young people with mental health conditions, during a six-week pilot. They reported a mean increase in confidence by 45.7% as well as improved self-esteem and wellbeing.

Finally, folks in recovery from addictions are another population thought to benefit from surf therapy. A phenomenological study from 2015 found that surf therapy can help support the repair of the mind-body connection after experiencing a trauma such as addiction, allowing practitioners to experience surfing as an embodied healing ritual that helps them develop mindful embodiment, secure attachment, and self-empowerment. I’d love to see more research in this area, as both adventure therapy and blue care have been shown to be helpful for folks in recovery.

As longtime readers of the blog will know, I’ve written a number of blogs on ecomedicine and nature therapy topics, and two of those are extra relevant here. You might even say that surf therapy is the brainchild of adventure therapy and blue care!

As a refresher for those who haven’t read my other blogs yet, adventure therapy is hands-on and experiential therapy that usually (but not always) takes place outdoors, which allows patients to confront and overcome a wide variety of issues—like addiction, anxiety, depression, eating disorders, trauma, codependency, PTSD or other emotional/behavioral issues—by taking risks in a safe and supportive environment. Examples of adventure therapy include camping, hiking, ropes courses, rock climbing, sailing, trust games, and cooperative games.

Meanwhile, blue care is a subset of nature therapy that champions the power of water to heal issues of all kinds: mental, physical, behavioral and social. Proponents contend that time spent near, in and on healthy waters can have fantastic health benefits and argues that this “blue prescription” should be in every doctor’s toolkit alongside mainstays like exercise, a good diet, and sleep. Time spent in water has been found to reduce chronic stress and anxiety, conditions which can exacerbate a variety of physical conditions including ulcers, colitis and heart disease. It can also help patients manage things like depression, trauma, addiction, grief and PTSD, as well as foster essential human qualities like happiness, play, creativity, awe and empathy.

The research on surf therapy as a pathway to healing is so far incredibly promising. From folks suffering from depression, stress, addiction, PTSD and more, surf therapy combines the best of adventure therapy and blue care in a way that promotes wellbeing, resilience, and peace of mind. It’s a low-cost and high reward therapeutic option that should be in the natural first aid kit of everyone with access to a board and some waves. So why not hang ten and see what happens?

(Remember: Ecomedicine is a far more diverse and interesting field than people might realize—it’s much more than just “going outside!”—and so the purpose of these blogs is to show you the exciting range, diversity, and nuance of the many therapeutic interventions that fall under the umbrella of nature therapy. You can check out the other blogs I’ve written on the site, on topics like gardening for dementia, therapeutic horticulture, pet therapy, adventure therapy, blue care, ecotherapy, care farms, forest bathing, hydrotherapy, breathwork in nature, earthing and grounding, greening the indoors, light therapy, culinary medicinal herbs, culinary medicinal spices, and sound therapy/soundscapes.)