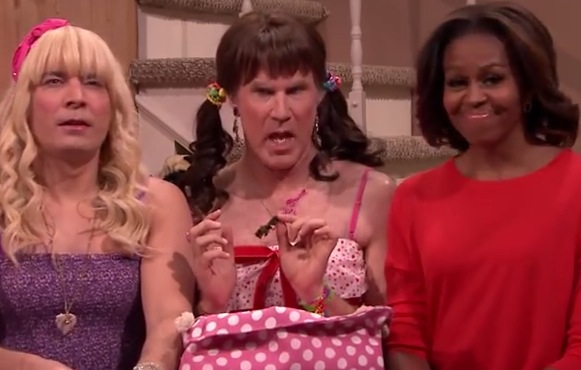 Here are a few of the sensational headlines generated from the new, deeply flawed Cell study showing, on the basis of one 24 hour dietary recall 18 years ago that for people between ages 50 and 65, protein intake over 20 percent of calories increases risk of death, especially death from cancer.

This type of hysteria doesn’t do anyone any favors.

It makes the researchers quoted, if the news reports are to be believed, seem PR crazy, not like serious scientists.

It contrasts with the positive, funny, smart example that Michelle Obama sets as she plays along with the hilarious goofiness of Jimmy Fallon and Will Ferrell, and so many others, to get people excited about exercise and even Kale Chips (my recipe here).  Childhood obesity is declining, slightly. What she has achieved is remarkable.

Aside from the faulty methods, wild conclusions and the media department’s wish for publicity (press release opening sentence: ~that chicken wing could be as deadly as a cigarette~) , there is this, which readers should know and should rely upon:

It’s widely recognized that sugar and starch make overweight people hungrier, and that those calories boost insulin resistance in anyone with extra visceral fat (about 70% of Americans, with Mexico, Latin America and much of Europe right behind).

And surely, if you’re not eating cruciferous vegetables along with your steak, meatloaf, chicken or salmon, you’re not detoxifying the cancer causing chemicals which arise when meats are cooked at high heat or charred or both. Brussels sprouts are actually a do-over for people who eat lots of animal protein.

But most of all, to avoid cancer, as obesity is a bigger cause of cancer than tobacco, don’t smoke, eat sensibly and make your weight half your height.

Stop the sugar-sweetened beverages, including sodas, juices, sports drinks, teas and coffees and drink my citrus water (make with bottled juice if you like).  To lower death from heart disease, diabetes, and stroke,  avoid extra sugar : it’s an independent risk factor.

Try a 6 inch plate for dinner at home: it will get full quickly and make the choices for you. Try nuts and beans and seeds as sources of protein: they seem to protect people older than 65 from frailty, and it is known that the older you get the more protein you need to maintain your muscles, stay strong, avoid falls.

In other words, if you’re in your mid-60s or older, or know someone who is, feel good–culinary medicine good- about preparing my Mandarin Chicken with Almonds or my Zesty and Gluten Free Black Bean and Ripe Avocado Burritos.

And if you’re 50+, do it anyway.  Because they’ll be better than any fast food meal or nearly anything you can buy when you’re eating out, and because you’re making dinner yourself: and that is the very best preventive medicine.

New Fitness Trackers: the One You Really Need