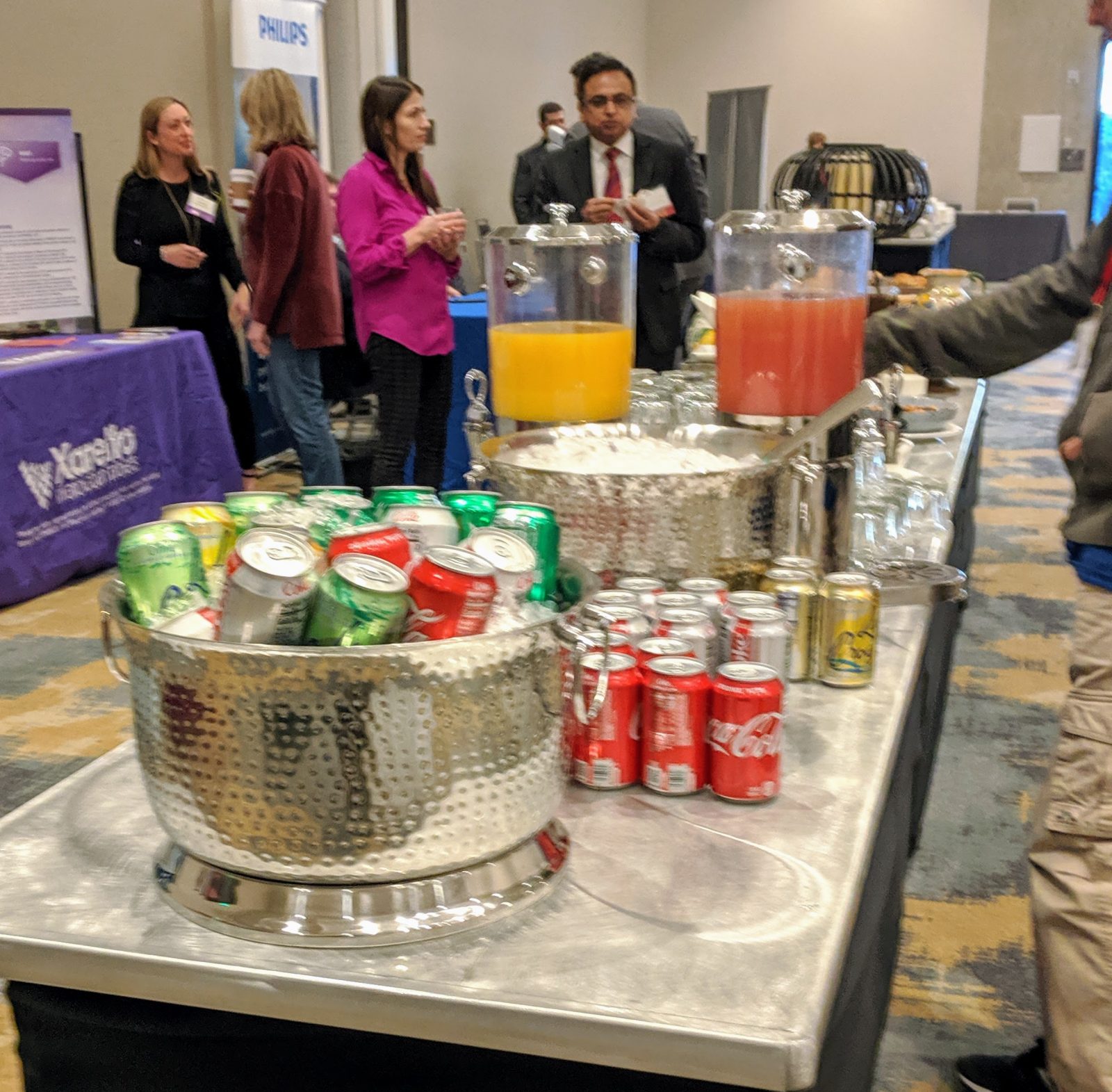 A first-of-its-kind study of medical meeting planners for physician annual meetings shows despite their own good intentions, MDs are still served dessert at every meal and soda at every break. No MD was involved in menu planning for any annual meeting in 2000 or 2001. No meeting was planned to include a vegetarian meal, or to exclude potato chips, snack mixes or candies at breaks in 2000 or 2001.

The research was accepted for presentation at the 3rd International AMA Conference on Physician Health in Vancouver, B.C., and published this month in the quarterly international peer-reviewed journal Disease Management.

Eat What I Say Not What I Eat:
New Medical Study Finds Food Served At Medical Meetings is Fattening; Physicians Prefer Fish to Meat, but Still are Served Dessert at Every Meal, Soda at Every Break.

Santa Barbara, CA, December 1, 2003 – Physicians are the most respected voice on nutrition in America, yet what they are served and eat at medical meetings does not reflect their leadership and may impair their performance at conferences, says a new research study published today in the highly respected peer-reviewed quarterly medical journal Disease Management.

Researchers interviewed meeting planners for 13 major medical professional societies, representing over 250,000 physicians and over 2 million planned meals and snacks for the year 2000 annual meetings. All were also planning or engaged to plan the 2001 Annual Meeting.

But the food reported as served was rich, sweet and caloric, and doctors were an easy-to-please group. Desserts were served at every lunch and dinner–over 350 lunches and dinners–and soda pop was offered with 100% of snack breaks–approximately 117 snack breaks. No specific nutritional guidelines were identified by any planner, and no physician was involved in the planning of any menu. No annual medical meeting was planned to include a vegetarian meal, or to exclude potato chips, snack mixes or candies at breaks.

Dr. John La Puma, of the Santa Barbara Institute for Medical Nutrition and Healthy Weight, headed the research team. He writes ‘The food served to and consumed by physicians at medical meetings does not appear to meet current nutritional guidelines;We believe that food at medical meetings should be delicious and special, but that special can mean something other than highly caloric and sedating meals.’

Dr. La Puma believes that this food may impair physician learning and conference performance, and that physicians are unaware that the meals served do not appear to conform to national nutritional guidelines, despite the well-intended plans of meeting planners. The authors offer Basic Suggestions for Medical Meeting Meals, including Substitute fish for red meat as an entr�e;Offer olive oil on the table instead of butter; and;Eliminate sugared soda and energy drinks; and;Eliminate deep fried foods, especially those fried in hydrogenated oils, containing trans fats.

The research was accepted for presentation as a paper at the American Medical Association’s Conference on Physician Health, Vancouver, British Columbia, October 2002. Dr. David Schiedermayer, M.D., F.A.C.P., Clinical Professor of Medicine at the Medical College of Wisconsin, Milwaukee, and Jennifer Becker, R.D., M.S. of Chicago, Illinois co-authored the research paper.

About Dr. La Puma
John La Puma, M.D., F.A.C.P. is a board-certified specialist in internal medicine and co-author of The RealAge Diet: Make Yourself Younger with What You Eat (HarperCollins, 2001). Dr. La Puma’s work has been published in The New England Journal of Medicine, The Journal of the AMA, The New York Times, The Wall Street Journal, and the Encyclopedia Britannica, and he has appeared on major network outlets (NBC, CBS, ABC, FOX, CNN and PBS) nationwide.

In 2003, he taught the first cooking class in the country to medical students at SUNY and was named one of the Country’s Top Physicians; by the Consumer’s Research Council. Dr. La Puma sees patients and lives in Santa Barbara, California.

About Disease Management
Disease Management is a system of coordinated healthcare empowerment strategies aimed at preventing chronic illnesses from progressing. A quarterly, international, peer-reviewed publication that comprehensively covers the clinical and business aspects of the field, it is also the official journal of the Disease Management Association of America. Disease Management is indexed in Index Medicus/MEDLINE, published by Mary Ann Liebert, Inc., and edited by David B. Nash, M.D., M.B.A., Professor of Health Policy and Associate Dean and Director of the Office of Health Policy and Clinical Outcomes at Jefferson Medical College in Philadelphia, PA
Contact information:
Tel.: (215) 955-6969
Fax: (215) 923-7583
David.Nash@jefferson.edu
###

Meals at Medical Specialty Society Annual Meetings: A Preliminary Assessment
JOHN LA PUMA, M.D., F.A.C.P.,1 DAVID SCHIEDERMAYER, M.D., F.A.C.P.,2 and JENNIFER BECKER, R.D., L.D.3
1Medical Director, The Santa Barbara Institute for Medical Nutrition and Healthy Weight, Santa Barbara, California 93105
2WAUKESHA MEMORIAL HOSPITAL; WAUKESHA, WI 53226
3Clinical Oncology Nutritionist, Midwestern Regional Medical Center, Cancer Treatment Centers of America, Zion, Illinois.
ABSTRACT
Little is known about how meals are chosen for medical meetings. We surveyed the annual meeting planners for 20 major specialty societies. Thirteen (65%) responded; all were currently planning their next meeting. Attendance in 2000 was reported at 113,477 physicians, with 2 million planned meals and snacks.
Decisionmaking. No physician was named as responsible for food choices: the meeting planner and staff were primarily responsible for deciding what food to serve, excluding exhibit halls. Twelve (92%) respondents rated “available budget” as the most important factor. “Nutritional guidelines” were rated “very important” by 8/13 (63%). However, no specific nutritional guidelines could be identified by any planner. All respondents indicated that members would attend a meeting if “healthy” food were the only option.
Meal Quality and Evaluation. For 2000, 100% of respondents indicated that for each lunch and for each dinner, a dessert had been included. No annual meeting and no planned 2001 meeting excluded potato chips, snack mixes or candies at breaks; soda pop was offered with each break. Most respondents (89%) relied on a concluding questionnaire about the meeting facilities to evaluate the food. Respondents reported no difference in charges for “special meals,” including vegetarian and kosher meals.
Physicians may be unaware that some food served at medical meetings may impair learning, with excessive calorie, fat and carbohydrate consumption. Small changes can improve the quality of food and beverages selected, without increased cost, and provide choices which conform to national nutritional guidelines. Medical meetings should serve flavorful, healthful food.

INTRODUCTION
Most physicians report that they observe dietary restriction.1 Recent national survey data, however, bring these data into question. Obesity and obesity-related diseases have increased in every sociodemographic and economic class, including the most well-educated and affluent.2
One of the few venues in which physicians can actually be observed while eating is during their annual medical society meetings. Little is known about how the meals are chosen for medical meetings.3 Robb-Smith4 notes “we must turn from physiologists to the doctors who actually wrote cookery books, though we cannot be sure that these physicians all fulfilled Andrew Boorde’s requirements that they should be ‘very experte in cokeing.’” Irrespective of their expertise in the kitchen, physicians do expect food and drink at medical meetings,5 and attend more often if meals are provided.6
We wondered how those responsible identify the parameters used for choosing meals, snacks, and beverages for annual national medical meetings. We also wondered whether physicians had input into the process of meal selection, and were curious about whether nutritional guidelines played a role in the food and beverage selection. Finally, we wondered whether physicians were observed to follow nutritional guidelines. Physicians who practice a health habit themselves are significantly more likely to counsel patients about that health habit.7

METHODS
A structured, pre-tested questionnaire was developed by J.L.P. and then presented, reviewed, and analyzed at the Medical College of Wisconsin Internal Medicine Research Methods Seminar by D.S. The questionnaire instrument was submitted and initially reviewed by the Institutional Review Board, and was returned to the investigators after being exempted from further review. The questionnaire was administered in July 2001 by J.B.
To determine the process involved in meal selection, we identified the 20 professional organizations, which comprise the membership of the Council on Medical Specialty Societies (CMSS) (Table 1). The CMSS is a non-profit association whose members are national medical and surgical specialty organizations representing more than 365,000 doctors nationwide. We then contacted the annual national meeting planners at each Society by telephone.
We asked respondents for information about themselves and their meeting planning efforts. We asked how they planned for, selected, and monitored the meals and snacks at their annual meetings. We asked respondents to rank 10 decisional factors on a 3-point scale of importance in selecting the food, snacks, and beverages for the previous year’s annual national Specialty Society meeting. We also asked for respondents’ methods of evaluation of the food served, and for the feedback they received from meeting attendees about the food, including what they said they liked and disliked, and which, if any, special meals were made available to attendees. We also requested menus for the most recent meetings.
Specifically, our questions were:
1. Who was primarily responsible for deciding what food to serve during the Annual Meeting, excluding the exhibit halls?
2. How important were each of 10 factors in actually deciding what to order, including nutritional principles and dietary guidelines?
3. Were “healthy alternatives” offered and selected and, if so, how often?
4. Was dessert offered at lunch and dinner, and was soda pop offered at snacks?
5. Was the food at the annual meeting evaluated and, if so, how?
6. How important would each of the 10 named factors be next year in deciding what to order?
7. What foods do physicians as a group tend to like and to dislike?
8. Is the meeting planner certified, and has she taken continuing education classes for food selection?

Coffee breaks and snacks: basic suggestions for medical meetings
1. Eliminate sugared soda and “energy drinks.”
2. Add bottled water, including carbonated water, to the beverages.
3. Provide whole fresh fruit, preferably ripe and in season (e.g., apples, oranges, pears, bananas, plums, peaches, apricots).
4. Eliminate tortilla and potato chips that are deep-fried, especially those that are fried in hydrogenated or partially hydrogenated oils. Eliminate the mayonnaise and sour cream-based white dips and dressings that accompany them.
5. Substitute chips and crackers that are baked or fried in olive or canola oil for the chips, and substitute tomato-based salsa and guacamole for the white dips.
6. Offer toasted tree nuts (e.g., almonds, walnuts, hazelnuts, pecans, macadamias) on the snack table.

Aging and Costs of Aging, Presentations